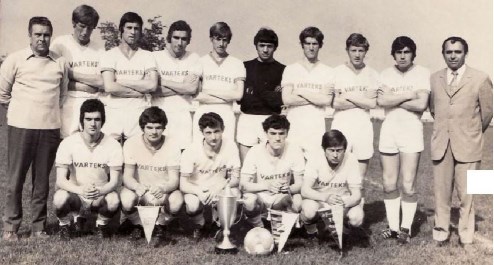 The biggest breakthrough among the Ivankovic brothers was made by Branko, the youngest and most famous member of the family: 12 playing seasons (1971-1983), 263 games and 31 championship goals are the summary of his playing performance for Varteks FC (Varazdin).

Zlatko Ivankovic, unlike his younger brother, wrote his playing football career with a deep furrow in Varazdin’s Sloboda, and his older brother, Drago Posavec (his mother’s Kristina maiden name), spent most of his football career in Slovenia, in FC Mura from Murska Sobota, after playing his junior internship at Varteks.

As “the apple does not fall far from the tree”, so did the  children of Franjo Ivankovic’s sons follow the well-trodden football paths. Drago’s son Srebrenko was for many years the leading player of the Croatian first league  club “Slaven Belupo” from Koprivnica. At the end of a successful playing career, he remained, just like his father, active in football. Branko’s son Hrvoje was a goalkeeper in the Croatian first league club “Varteks” and today he is, together with his sister Mia, successfully running the TTS sports center in Varazdin. Zlatko’s son Domagoj also played football before he left to study in Zagreb. He was the first team player of the then third league club “Sloboda”.

And this is not the end of the story about the Varazdin football empire Ivanković. The playing careers of the Ivankovic (Posavec) brothers proved to be a good impetus for amazing coaching football careers achieved later.

In a challenging coaching job, Branko Ivankovic established himself as a trophy-winning Croatian football authority and one of the most respected coaches in Asia. The list of his coaching achievements is so long that it would take up the entire text, so I’ll list only the biggest ones. The clubs he led were champions of Croatia (Dinamo), China (Shandong) and Iran (Persepolis, three times). He was named coach of the year in Croatia (2006/7), China (2009/10), Saudi Arabia (2011/12) and Iran twice (2016/17 and 2017/18). He was assistant to Miroslav  Blazevic in France in 1998, where the first bronze football medal for Croatia at the World Cup was won. With the national team of Iran, he managed to secure a place at the World Cup in Germany in 2006, and with the most famous Iranian club Persepolis FC he played the Finals of the Asian Champions League. Successes in Iranian football have brought him the status of one of the greatest football legends in that populous country.

His two years older brother Zlatko Ivankovic also achieved an impressive coaching career. It was not as resonant as Branko’s in the media, mostly because it was focused on the younger age categories in the NK Varteks Football School and the NK Slaven – Belupo Football School.

The oldest of brothers Drago Posavac, on the other hand, has the most significant coaching results recorded at the time when he led the Slovenian first league teams Mura and Potrosnik.

Although today, by their age, all three brothers should be in well-deserved retirement, they are still active in football. Branko and Zlatko are engaged as coaches in Oman, leading their national team, and Drago is a strategist for the players of the local football club Obres.

The Ivankovic football family is a school example of how a zealous commitment to something can be identified through a single surname over a number of years. The surname Ivankovic is a football term in Croatia.