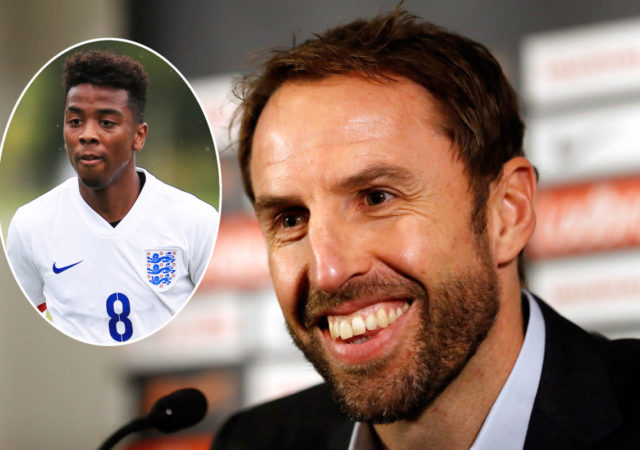 By the end of 2014, England Under-21s head coach Gareth Southgate, director of the elite development Dan Ashworth and head of player and coach development Matt Crocker presented the new plans for the future of English football. They are presented as The FA unveiled its England DNA philosophy at St. George’s Park with the ultimate goal of creating winning England teams.

The impression that is left behind the young England selection at the EURO U-17 competition currently being held in Croatia suggests that the project succeeded. Young English teammates are both technically and tactically brilliant, returning England to former days of pride and glory. A quick reminder on what are the basic elements of England’s DNA philosophy at St. George’s Park:

English football has a rich football heritage and history which we want all England players to be aware and respectful of.

Before arriving at St. George’s Park the players will understand what is required to represent England – and an induction process will be shared with the players so they understand the ‘England way’.

Establishing a distinct and recognisable on and the off-field England culture, based on clear values and beliefs, is central to our DNA.

The backstories of players in the England setup are wide and varied with many players of multicultural background in our teams. The diversity of our England players is to be celebrated.

The process of awarding caps is going to be formalised across all age groups to help instil a better sense of pride and understanding in what it takes to become an England player.

Young England players will be exposed to a comprehensive and varied games programme as early as possible in their international career. Fixtures will take place against teams from around the world.

2. How we play
How England development teams play will be the strongest demonstration of the England DNA.

England teams aim to intelligently dominate possession selecting the right moments to progress the play and penetrate the opposition.

England teams aim to regain possession intelligently and as early and as efficiently as possible. All aspects of the out-of-possession philosophy will take into consideration the state of the game, the environment and pre-determined  game-plan.

England teams sense changing moments in the game both in and out of possession reacting instinctively and intelligently.

England development teams will play with tactical flexibility, influenced by the profile of the players and the requirements of the match or competition

We hope to identify and develop future England players with the following core attributes and skills:

4. How we coach
All England training sessions are meticulously planned for and delivered using the England DNA Coaching Fundamentals. Crucially, every training session will be reviewed in order to review future coaching sessions.

All England training sessions are built on the following core principles:

5. How we support the process

All aspects of a player’s England experience are supported by a range of specialist medical, scientific, analytical and psychological disciplines to enhance the coaching process, player and team performance.

Although many football connoisseurs claimed that the foreign players’ invasion on the island has negative consequences on English football, it turned out that this was not the case. The new system of academic development of young players (each club has its own football academy and works with young talents) works perfectly, and it is just a process that takes time.

Judging by British media writing, one of the creators of England’s DNA philosophy at St. George’s Park and the Under-17 manager Gareth Southgate believes that the English football team could be the best in the world, if this island mentality would be resolved.

He calls for better co-operation between the English Football Association and the Premier League, and says:

“We’re an island, we’ve got to get off the island and learn from elsewhere. We need to look in the mirror and change the way we do things tactically, physical preparation, our style of play and mentality.“

We have some great strengths. If we couple those with some other traits, we could be more powerful than anybody, but we have a lot of work to get to that point.” ( Source: http://www.independent.co.uk )